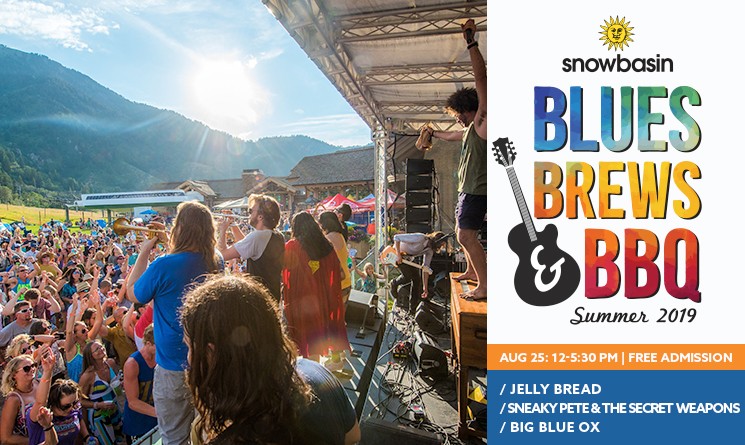 Join us on the lawn at Earl’s Lodge on Sunday, August 25 for our Blues, Brews & BBQ Concert Series with Big Blue Ox, Sneaky Pete & The Secret Weapons, and Jelly Bread! Relax on the lawn with a blanket, have a beverage, and listen to some incredible FREE live music! Delicious BBQ lunch and other offerings are available in Earl’s Lodge are available as well as several local brews on tap. There are great family-friendly activities and games for the kids including a bungee jump, climbing wall, adventure course, playground and newest activity - The Wildflower Mini Golf Course.

With the renovations happening in Earl’s Servery all food and beverage services will be outside through the remainder of our Sunday operations. During Blues, Brews & BBQ the menu will include BBQ, Grab-&-Go Sandwiches, Grill Items, Salads and all meals that previously came with fries now come with chips. Thanks for your understanding!

***No outside food or beverage allowed in the music venue or the lodge. Utah State Law prohibits the possession and consumption of outside alcohol including beer & wine on premise. Bags may be subject to search at the music venue gate and any alcohol or outside food may be confiscated.

Dogs are allowed in the music venue, but they must be on a leash at all times, and they must stay on the grassy areas. Dogs are never allowed in the lodges or on the patio, with the exception of service dogs. Umbrellas, shade tents, and chairs are allowed, but please be courteous of other guests.

If you have a tent or umbrella, please set it up near the back of the venue and do not block other’s views. Low chairs welcome towards the front (cannot fit a basketball underneath) but if you have higher chairs, please move towards the back.

Sneaky Pete & The Secret Weapons
Sneaky Pete and the Secret Weapons is a collective of musicians channeling original music through a lens of hazy funk and unending groove, all witnessed and interpreted from the peaks and valleys of the Rocky Mountains. Their genre-blending sound of funk, rock, jazz, and hip-hop moves from the streets of New Orleans to smoky jazz dives, intergalactic spaceships, and late-night laser-filled clubs.
Initially drawn to Jackson Hole with a shared passion for skiing and mountains, the group formed in late 2011 when friends Jack Tolan (guitar/vox) and Sam Lowenthal (bass) got together with the vision of "making funk noises," and featured a rotating cast of 'Secret Weapons' playing small gigs in Jackson, WY. With the addition of Bobby Griffith on trumpet, the band had their breakthrough performance on December 21st, 2012, a legendary party known as “the FUNKapocalypse.” By the next fall, with the addition of keyboardist Galen Karnatz, it was time to hit the road and take their sound beyond the towering walls of the Tetons. They quickly built a reputation for high-energy performances and sweaty dance floors across the western US, taking to the road with repeated tours and expansion into new markets outside of the “Hole”.

Big Blue Ox
Big Blue Ox is an explosive funk juggernaut from Salt Lake City, Utah. Throwing down head bangin' grooves and blistering horn lines, this band is sure to elevate the mind and move the booty. Big Blue Ox recently released their self-titled EP, featuring some of the group’s most groundbreaking work.
The band’s core members, George Simon, Mason Peterson, and Wachira Waigwa-Stone, founded the first incarnation of Big Blue Ox while attending the School of Music at the University of Utah in 2009. After a hiatus, the band reformed in 2015 with an all-star lineup, including a 3-part horn section, analog synthesizers, and world percussion. Be sure to catch Big Blue Ox at a festival or venue near you.
https://bigblueoxfunk.com