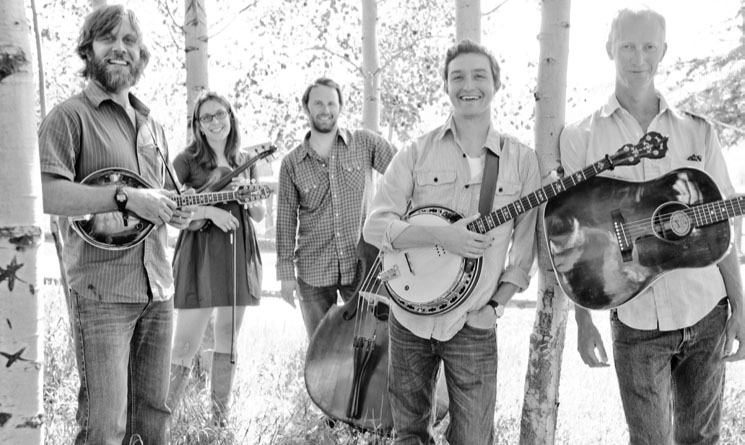 Quick pickin’ and tight harmonies has gotten Colorado-based bluegrass band Trout Steak Revival into all the right places at all the right times. Walking away as winners of the 41st Telluride Bluegrass Band Competition, as well as a highly-praised new album makes Trout Steak Revival a music force to be reckoned with.  The five-piece string band has a knack for incorporating into the lyrics an appreciation for the culture, land and people of the mountains that inspire the music.

What better place to catch Trout Steak Revival than at their epic return to Snowbasin Resort? The band will take over the Cinnabar in Earl’s Lodge for a full weekend of après ski music and entertainment March 18-20.

I had the opportunity to reach out to Trout Steak Revival fiddler, songwriter and vocalist Bevin Foley. In this exclusive interview, she talks about the importance of harmonies and what it’s like to play for the mountain town crowd.

When it comes to the songwriting process, does the main vocalist featured in the song take primary charge of the lyrics, or is it a collaborative effort?

Bevin Foley: So far in our songwriting process the vocalist featured has written the majority of the lyrics.  I think that this happens because it is easier to be very genuine and authentic while singing a song if it is in your own voice, your own words.  Most of the collaboration in our songwriting has come from arranging and instrumental melodies. Cutting or adding sections here and there. Changing chords around.  As we get closer and older as a band the collaborative process has been changing so I think one of our next steps in the future is to collaborate more on the lyrical content of the songs as well.

Why is harmonizing an important part of the music for Trout Steak?

BF: Harmonizing just sounds so cool.  I think that we realized right before the recording of our last album that writing harmony parts more intentionally and really focusing on our vocals just made every song sound that much better.  We took vocal lessons, re-wrote our vocal parts, focused on making each and every song as beautiful as possible not only with our voices but also our instruments.

Along with that, does harmonizing create a tighter connection within the band? And in what way?

BF: I think that it does make us a tighter band.  There is something that happens when the 3 or 4 separate notes of a chord come together with the same intensity and intonation that is really magical.  It sounds so full and vibrant.  The harmonies give us something to aim for and to listen to while singing.  Raising our voices together in song is always more fun than just singing alone.

The band has been recognized recently not only in Colorado, but all over the country for the seamless blend of modern mountain music and fundamental bluegrass. Is there a special kind of excitement before a mountain town gig? Does the crowd seem to receive music and message better?

BF: We love playing in Colorado.  The more time that we spend out on the road and away from home the more special our Colorado shows get to us. Seeing our friends and family and the people who have been seeing the band from the beginning just feels like a huge family reunion.  I don't think that the crowd in Colorado receives the music and message of the music any better than anyone else across the country, but they do have a real appreciation for how far we have come as a band over the last 7 or 8 years. It's really special to share our new music with people who have been there since the beginning.  Their support has had a huge effect on our growth and our ability to be able to do this. Our friends in Colorado have been with us since the beginning.

First time at Snowbasin Resort? Also, excited to return for the Ogden Music Festival in June?

BF: This is our second year coming out to Snowbasin.  Last year we played a weekend as well. It was great!  We are incredibly excited for the Ogden Music Festival. It is a festival that we have always wanted to go to and it is a pleasure to be playing this year!