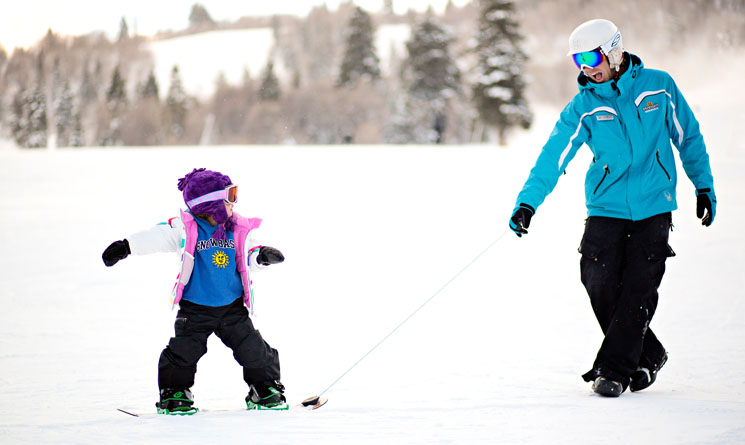 Riglet Parks use terrain-based learning to teach young kids to snowboard. What this means is that my son can skip the hours, days, and weeks needed to learn technical skills and skip right to the fun stuff! And I can skip the painful times of frustration, tears and anger that often accompany learning a new winter sport. Snowbasin created a fun dinosaur-themed environment where my son can learn all the basics of snowboarding while riding over mellow terrain features like berms, rollers, and rails. WHEN YOU VISIT: We found the Burton Riget Park right next to the Grizzly Center and outside the Snowsports Learning Center at Snowbasin. After signing waivers, my son’s instructor took him to get boots and a board. Out front, he got to meet Dino and Terry, the local Snowbasin dinosaurs. His imagination was ignited and then he was off! The instructors used small snowboards fitted with a Riglet Reel (a thin retractable cord mounted on the front) to pull my son through the course. As my son’s balance and board control improved they were able to let go, even allowing him to ride the back side of a berm or rail completely hands free! WHAT TO EXPECT: My son had a fantastic time exploring a new winter sport, which in itself is a miracle. If you have young kids and have taught them a new sport such as skiing or snowboarding, then you know those first few times can be truly frustrating for everyone involved. My son had a huge smile the entire time! So did I. As a bystander I was amazed by the positive and fun atmosphere created by the instructors. They were always quick with a high five and encouraging words. Watching them with other kids, I was able to see that they could quickly adjust to the different ages, abilities and temperaments. With young kids, one of the most important things (IMHO) is a building atmosphere. I don’t necessarily care if my son walks away on track to being the next Shaun White. I want him to believe a little more in his strength and ability to try new things and succeed. Snowbasin’s Riglet Park, accomplished just that.
Share