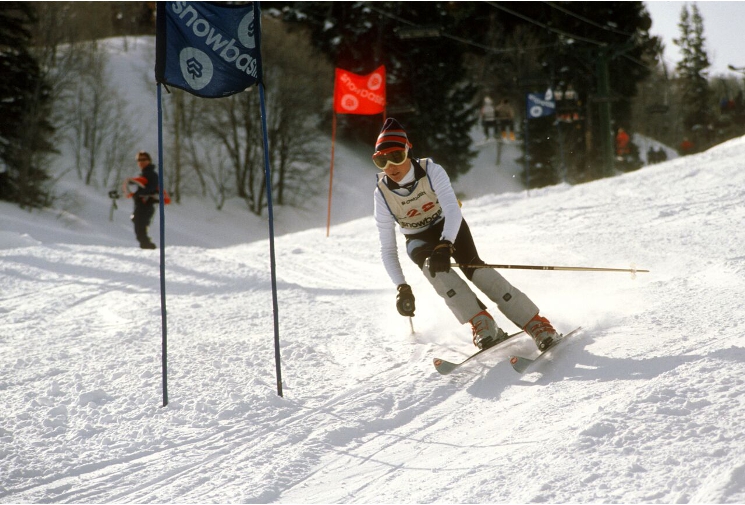 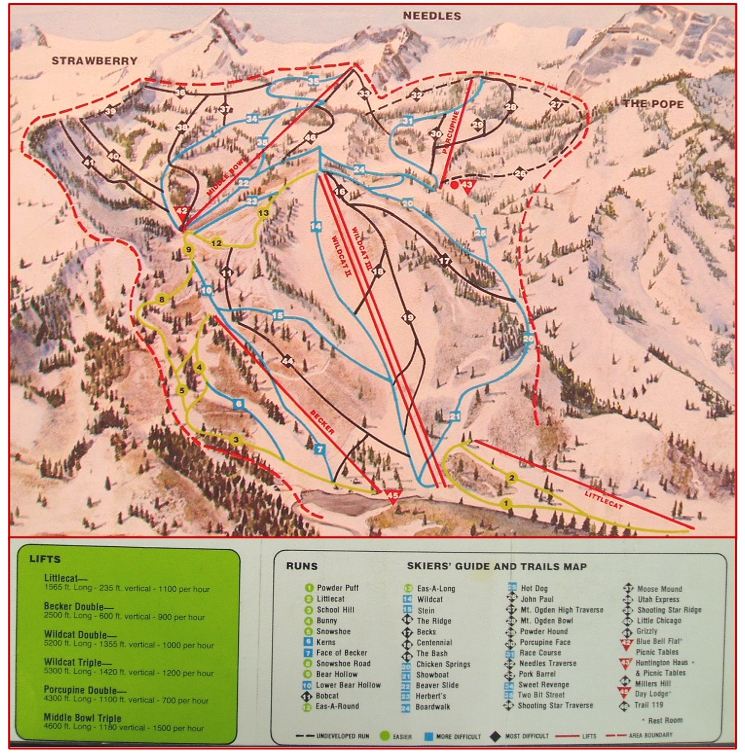 Gelande and Snowbasin go together like “peas and carrots” and for a third time in 5 decades a hill was cleared and prepared for jumping competitions. The first two jumping hills were Bjorngaard Hill in the 1940's and Engen Hill in the 1950's. The latest jumping hill was located on the top section of the Utah Express run and the run out was in the current location of the new snow making reservoir. Local skier, Keith Runkels, talked at the 75th Anniversary Gala of how the competition began. Keith said with Pete Seibert's approval, the local jumpers developed the run. To groom the steep landing area they had to have a snowcat with a winch. Snowbasin did not have a winch at the time but with a little inginuity and the old cable from the Powder Puff T-bar they were able to build a winch system and smooth out the landing area. The Gelande Contest was held for many years in the 1980's. 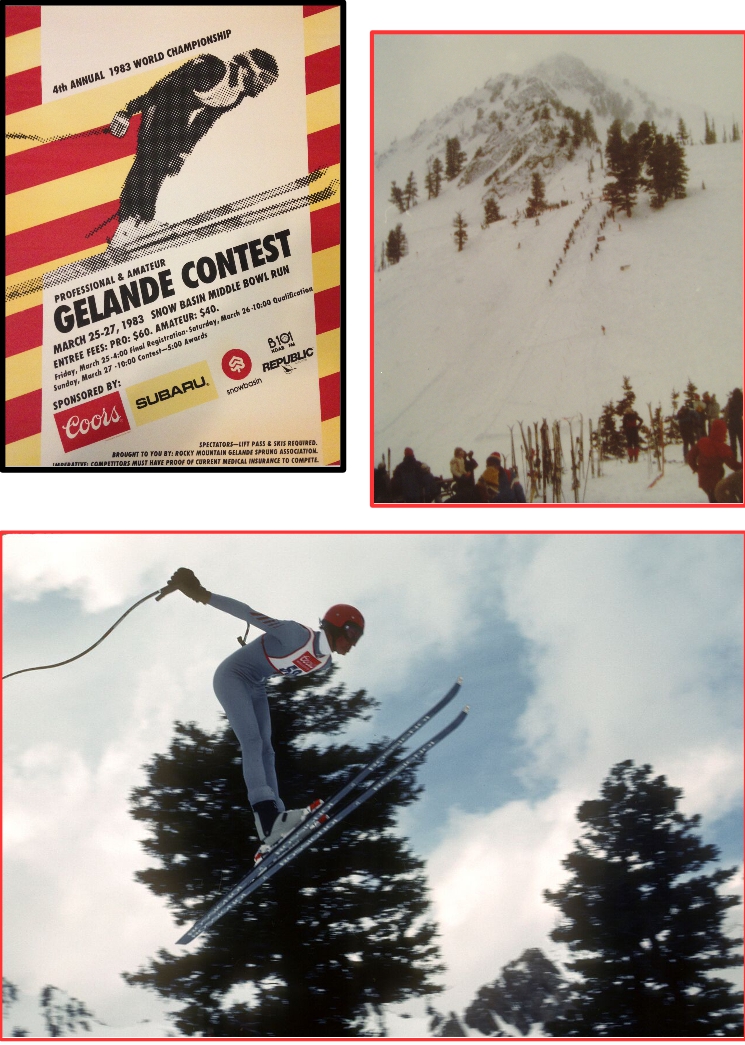 In my opinion, the most recognizable feature at Snowbasin Resort is Wildcat Bowl. In the early days of Snowbasin, Wildcat run (as it was called at the time) was the main run with its wide and long bowl shape, nearly one mile in length.

The Name - From the book: For the Love of Skiing by Alan Engen “Under the supervision of Alf Engen, the CCC cut ski runs. In the process of clearing one of the runs, the crew stirred up a litter of wildcats. That encounter lead to the naming of the Wildcat ski run.”

Wildcat Bowl has been used for countless races over the years. It also has several great runs that lead into it. Centennial, which was named in 1947 after the “Pioneer Centennial” 1847-1947. Bash, which was once called “Fletcher's Run” and then “Exhibition” was a favorite in the 1970's and 80's and boasted a very challenging mogul field.

Today, Wildcat Bowl is still popular and when groomed is one of my favorite cruising runs. If you're feeling nastalogic take a run down Wildcat Bowl and try to imagine what it must have been like in the early days. 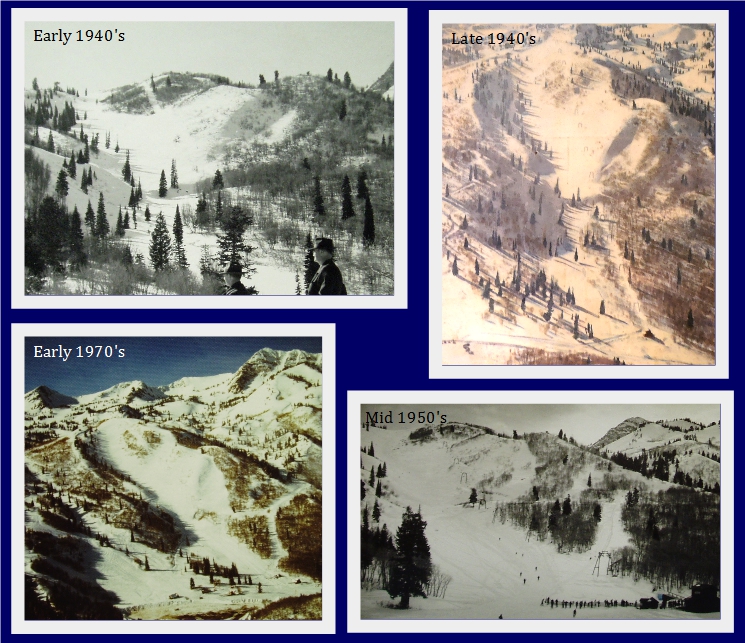 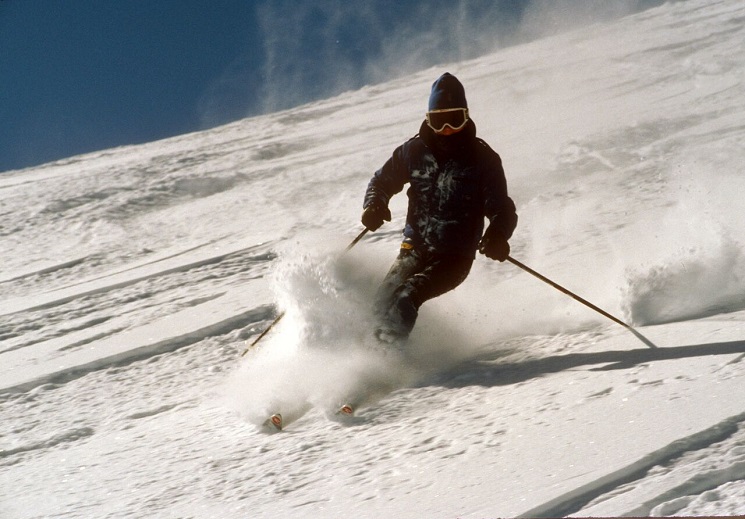 The Ralph Johnston Collection has been the backbone of this blog and I'm grateful to Ralph for making it possible. By donating his collection to the Weber State University Archives, Ralph's memory lives on in the photographs, newspaper articles, letters and ski patrol memorabilia. It's obvious that Ralph loved skiing and ski history. His collection is probably the most extensive collection of Snowbasin Resort photos and articles that is open to the public. 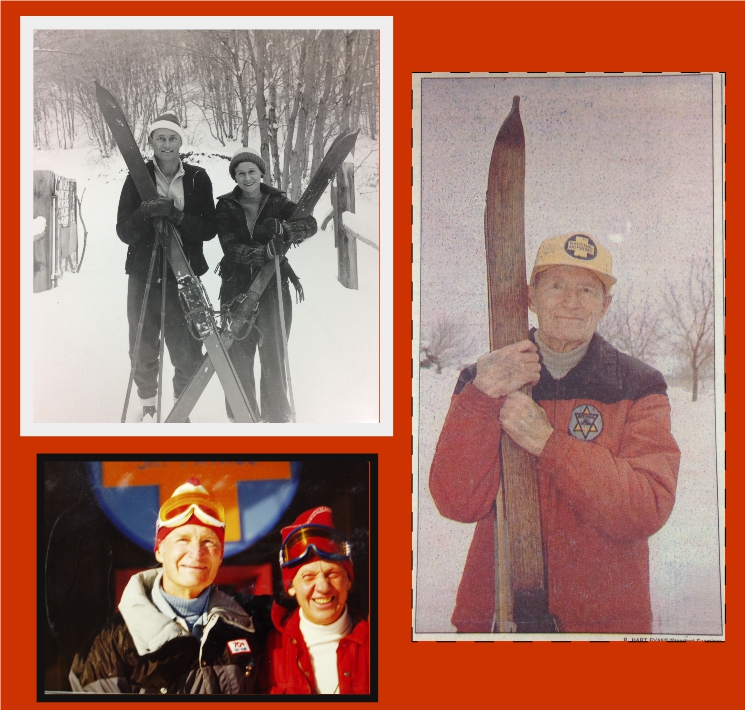 I wanted to write about Ralph in one of the blogs and then I came upon this wonderful article written in 1984. 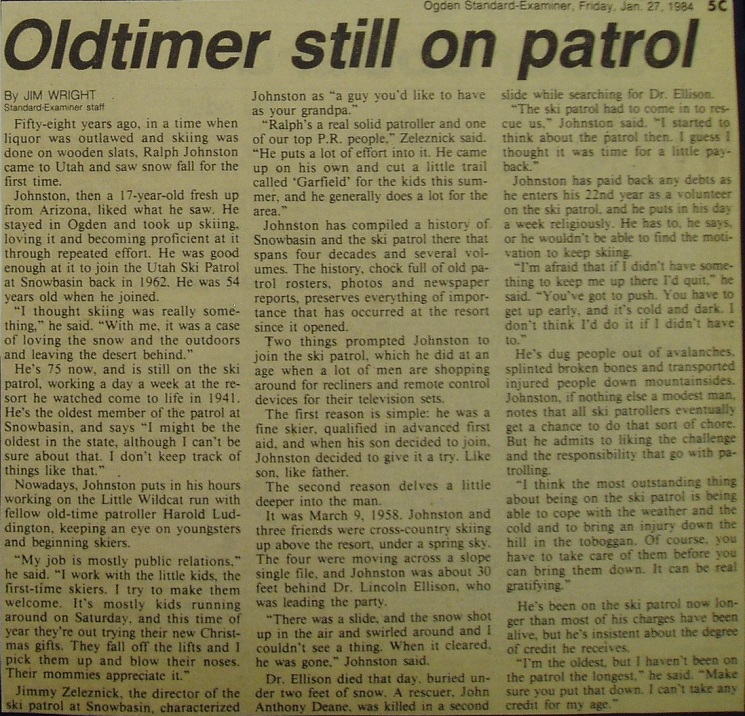 Below are few of my Snowbasin ski passes from the early 1980's. I had to earn each and every one of them by working a few hours a day after school at my dad's factory. They cost between $8.00 - $10.00 each, which at the time seemed like a lot of cash. During the winter months, my best friend and ski buddy, Mike Noah and I were dropped off at Mount Ogden Junior High School on Saturday mornings to catch the UTA Ski Bus, sometimes the bus was so full that you had to stand or sit in the door wells. I have so many great memories of skiing at Snowbasin during my Jr. High and High School years in the early to mid 1980's. Snowbasin was truly the place to be on the weekends.

Above left: I'm on the right with my Snowbasin hat and Solomon shirt. In the summer of 1982, Mike and I were dropped off in the upper parking lot and we hiked up the access roads to the top of Porcupine lift and camped. The old lift shack was open so we borrowed a couple of chairs. Above right: Mike (left) and I last season on the Needles Gondola. 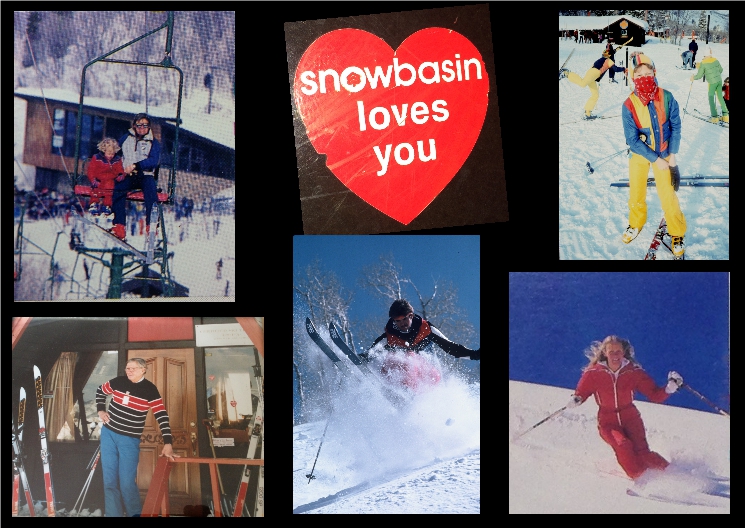 After six seasons and a valiant effort, Pete Seibert put Snowbasin on the market. The reason... funding. Seibert and his partners were unable to come up with enough investors to start the development on Trappers Loop Village. By the end of the 1983-84 season Snowbasin was broke and opening for the 84-85 season looked grim. In order for Snowbasin to open, Pete Seibert had to find a buyer.

In an excerpt from and interview with Earl Holding from the November 2000 issue of Ski Magazine, Earl talks about his first encounter with Snowbasin:

Enter Holding. “I was working at the [Sinclair] Oil offices one day and [Pete] Seibert called and said, I'd like to sell Snowbasin, and I'd like for you to come up and look at it.” At first, Holding wasn't interested. Remembering the millions he had sunk into Sun Valley, he told Seibert, “Pete, one ski area is enough, I'm not going to even come look at it.” But Seibert persisted. “Earl, just come up and hike it with me. I'm not going to twist your arm.”

He finally agreed and made the trip with his youngest daughter Kathleen, who was 23 at the time. Like many first time-time visitors who clilmb Snowbasin's crumbling access road to Inspiration Point, he was stunned by the beauty of Mt. Ogden, where rock pinnacles rise above open meadows studded with islands of dark fir, aspens and scrub oak.

Guided by Seibert, Earl and Kathleen traversed the upper bowls. “We hiked down through Strawberry Bowl, where the chaparral was clear up to my arm pits,” he remembers. “Pete was going like a mountain goat—he was in great shape—and on the way down we were hiking down Penny Lane. My daughter was on one side of me and Pete was on the other, and she tugged at my sleeve and when I leaned over, she whispered in my ear, 'Dad, you ought to buy this.' When I asked her why, she said, 'Because it's so unspoiled.'” - Written by Andrew E. Slough 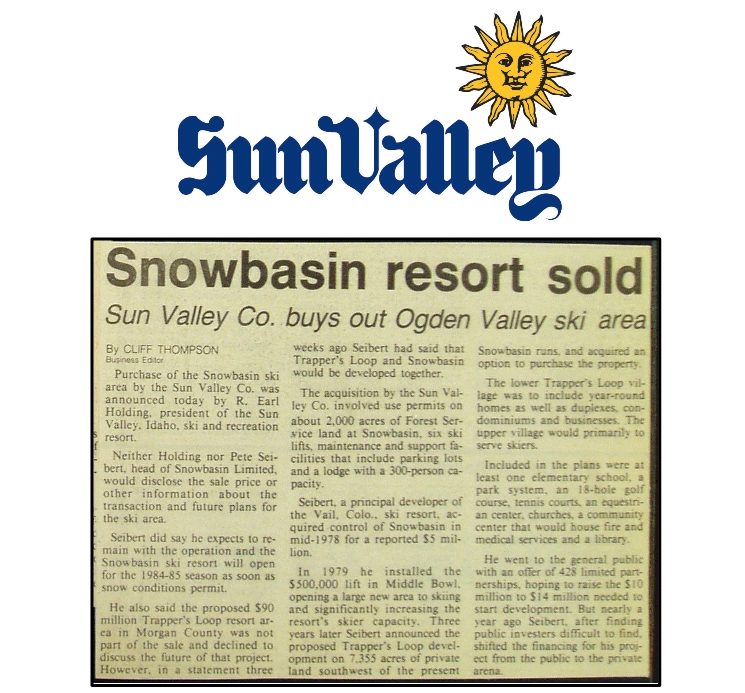 In the fall of 1987 the Becker and Porcupine double chair lifts were replaced with brand new triple chairs. The two new lifts were designed and built in Switzerland by the Staedeli Ski Lift Company. The lift houses are totally enclosed and are designed to look like an alpine chalet. Both lifts are able to transport 1,800 persons per hour. Becker has 1290 vertical feet and Porcupine 1501 vertical feet. 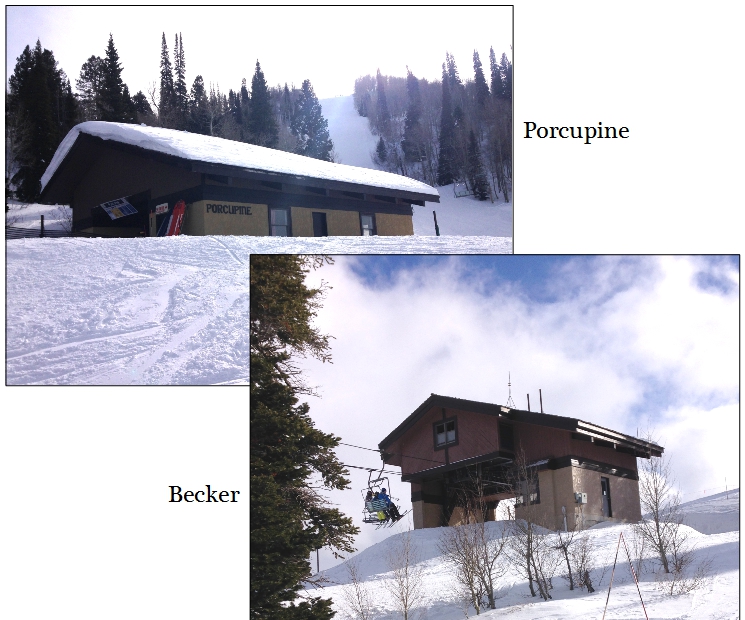 The remainder of the 1980's were focused on running a first class ski resort and planning for future expansion. Before expansion could happen the way Sun Valley Co. wanted it to, they had to have full ownership of the lower parking area, some 1700 acres which would involve a land swap. 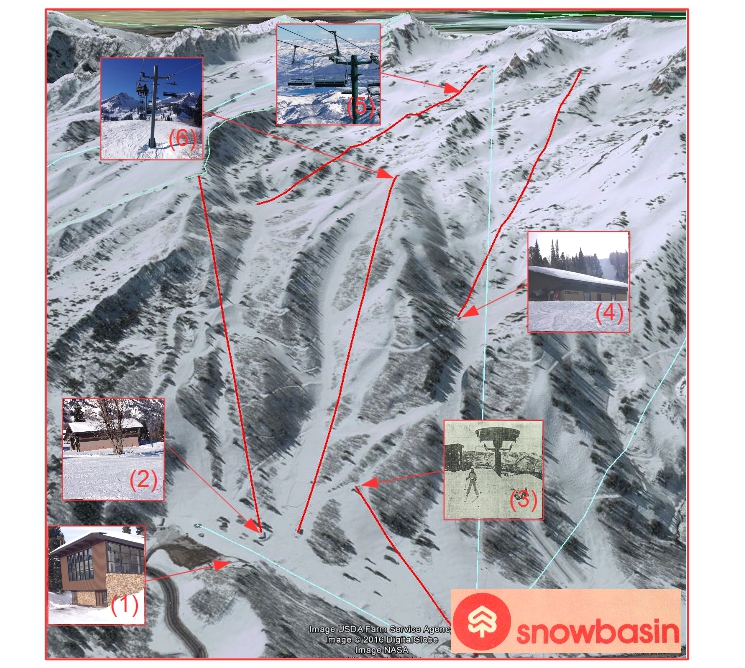