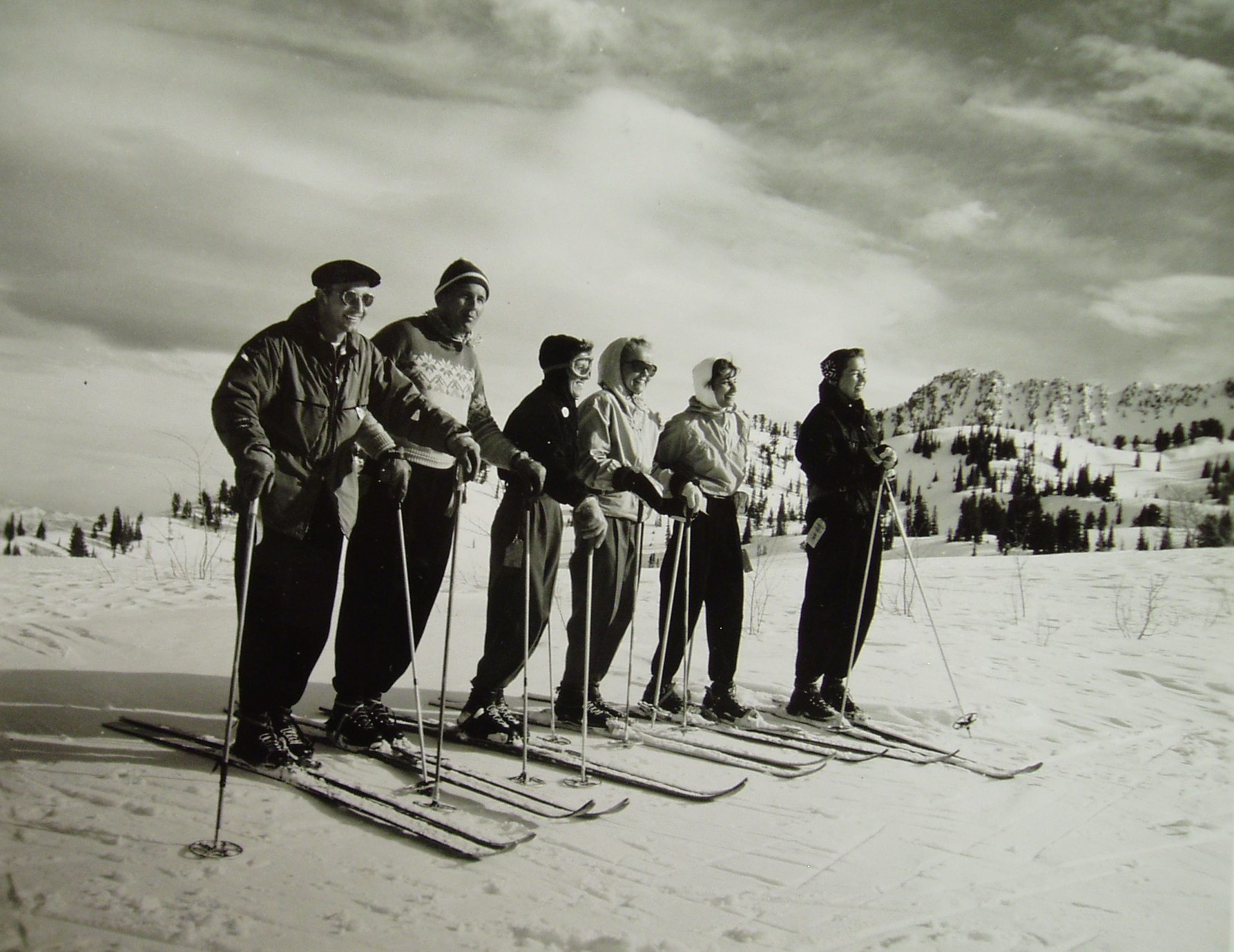 Snow Basin had now been open for a decade and was a success. The chair lift had been running well with very few breakdowns, the paved road rarely closed after big snow storms, America was finally at peace and there were future plans in the works to build another lift that would take skier's to the saddle of Mount Ogden. All was well at “Ogden's Winter Wonderland”.

In the quest for Snow Basin history I was informed of the race called “The Eccles Cup”. Several of the local ski enthusiast that skied back in the 1940's and 50's schooled me about the specifics and said the cup was a pretty big deal back in the day. Great skiers from all over the country made the annual trek to Snow Basin to participate.

Sponsored by Mr. and Mrs. George S. Eccles, The Eccles Cup ran from the late 1940's through the mid 1950's. The winners from each season got their name engraved on the cup. In 1948 a young newcomer from Sun Valley's “C” Team named Warren Miller (the ski film maker) shocked his fellow team mates by winning the Men's Giant Slalom. In Warren's book “Warren's World” there's an article, “The Parking Lot Ski Team” about his racing adventures. I would like to thank: Scott Kolts of Dahlgren, IL (former Ogdenite) for emailing me the story. 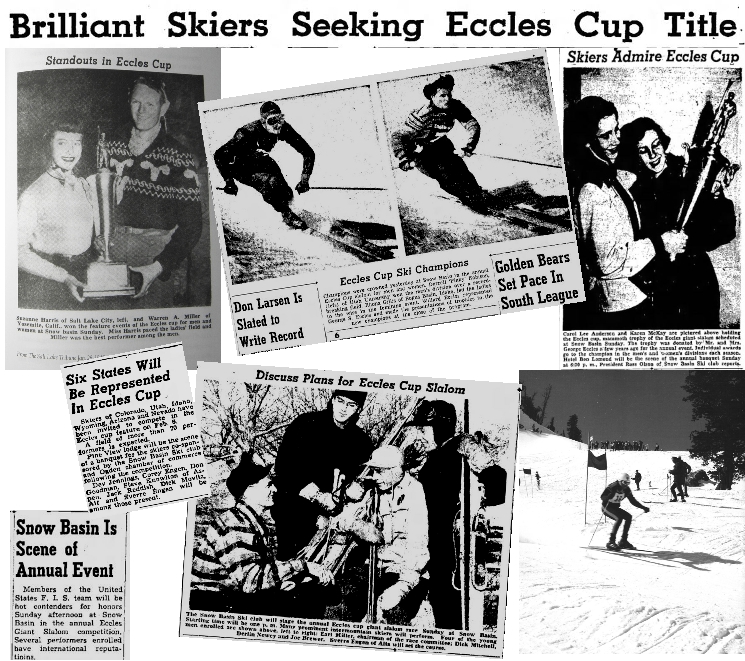 Ski Jumping “Gelande” was still popular in the 1950's and Snow Basin decided to clear a new jumping hill just to the north of School Hill. The spot was great for spectators and could be accessed from the top of the Becker rope tow. The Hill was named Trond Engen Jumping Hill after Alf, Sverre and Corey Engen's father, Trond. Dedicated on February 11, 1951. “The Ski Club feels the Engen brothers have done more to promote skiing in the area than anyone, and it is only proper that the hill should have their name.” - Ogden Standard-Examiner

Engen Jumping Hill was used regularly through the 1950's but slowly faded away in the 1960's. The run eventually stopped being used and mother nature filled it back in. If you know where to look, you can still see the outline of where it was originally cut out. 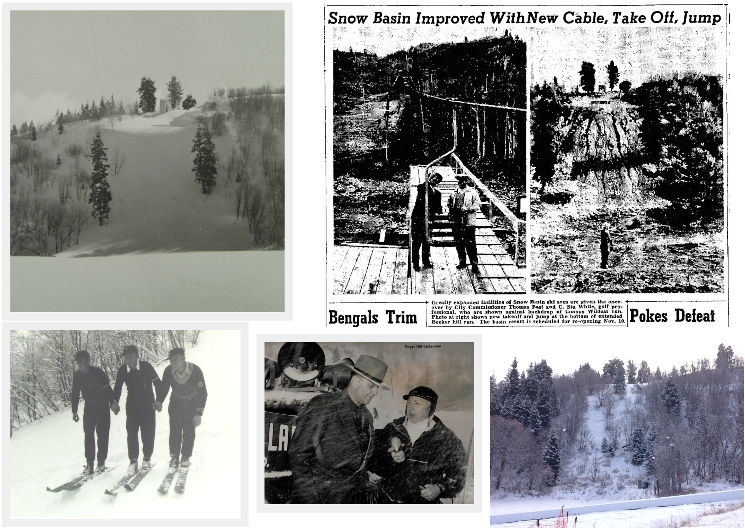 In the early 1950's Ogden City started looking for a buyer for Snow Basin. Ogden City didn't have the budget and wasn't creating enough revenue to expand the Winter Wonderland to its potential. It's not that the area wasn't popular, it was just expensive to operate and maintain the lift and tow. They needed a professional in the industry to own and operate the area. The Snow Basin Ski Club was involved in the decision to sell Snow Basin and helped find a potential buyer.

In 1953, Sam Huntington, a successful ski area operator, was approached by the Snow Basin Ski Club to take a look at Snow Basin. Sam and his investors were in the market to purchase a ski area. Sam was very impressed and made an offer that was accepted by the city but at the last minute Sam's investors pulled out of the deal. Ogden City continued to search for a buyer. 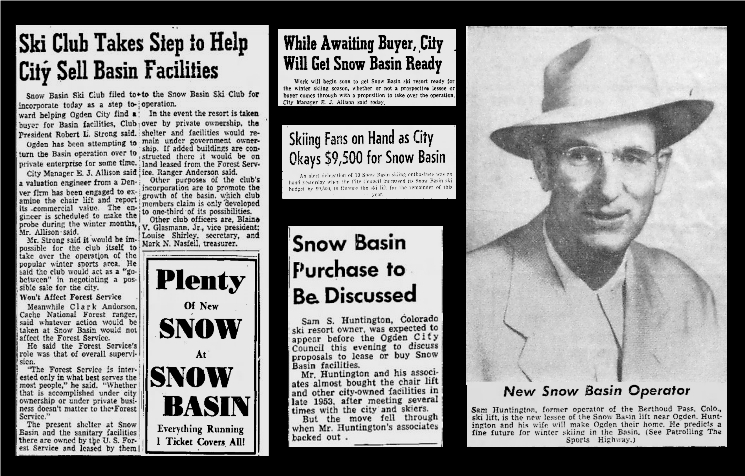 Sam never lost interest and in 1955 made a deal with Ogden City to lease Snow Basin with an option to buy at any time during the lease. In 1957 Sam officially purchased Snow Basin Ski Lifts. The concessions, Ski Patrol and Ski School were all owned and operated by other parties. Sam only wanted to develop the ski lifts and runs.

As part of the purchase deal, Sam Huntington was required to build a second lift in the Porcupine area which was located below Mt. Ogden. The lift was a french saddle type of tow which is similar to the popular “Poma-Platter” except in has 2x4 sized seat instead of a disk. Sam, being the innovator that he was built most of the tow himself and according to a few of the locals he used Army surplus, half-track wheels for the cable to run on. The Porcupine Tow ran from 1956 to 1961; it was removed after the Porcupine Double Chair Lift opened. 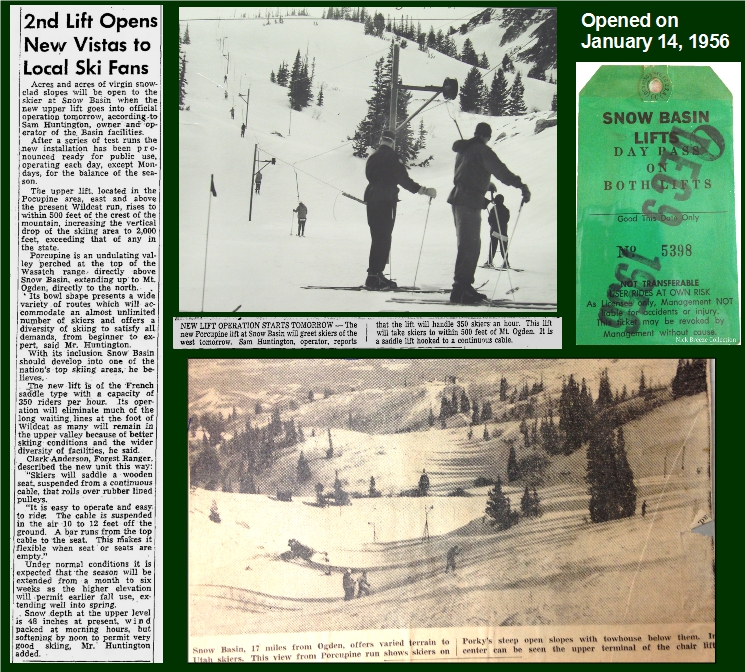 Earl Miller started teaching skiing in 1948 under Corey Engen. When Corey moved to McCall, Idaho the Snow Basin Ski Club took over the Ski School and named Earl as Ski School Director. In 1955, after receiving a permit from the Forest Service, Earl Miller and his wife Gladys, opened The Earl Miller Ski School. Earl and Gladys also operated the concessions at the Forest Service Shelter for a short time. Besides being a ski instructor, Earl served on the National Ski Patrol in the 40's and 50's. Earl was a successful ski racing coach and coached the Weber State Ski Team for many years. Earl's three sons, Alan, Dale and Ray were championship skiers and had trophies stacked throughout their home. 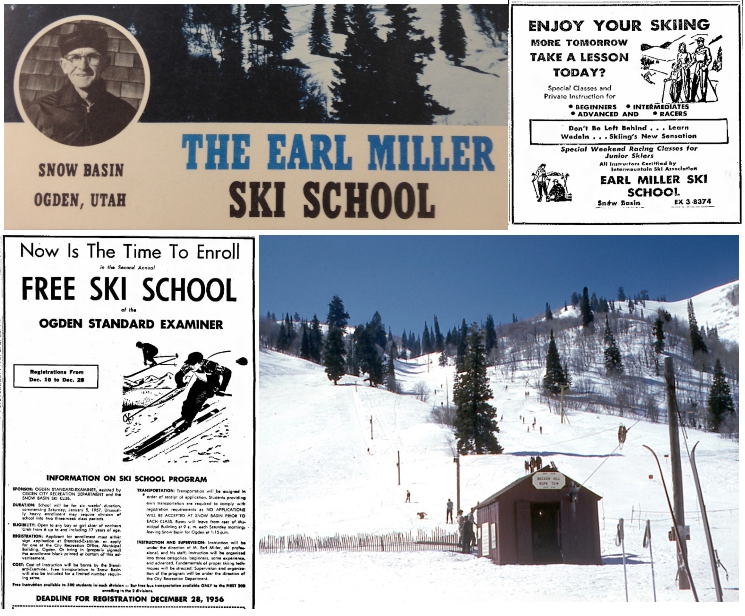 “Teach them to ski and they will come” The Earl Miller Ski School did just that. Snow Basin started an annual ski program in the early 50's that would teach children how to ski for FREE. Starting in the 1954-55 season the Standard-Examiner began sponsoring the program. Over the years, thousands of Ogden area children learned how to ski and became life long dedicated Snow Basin skiers.

The Earl Miller Ski School ran until 1984 when Sun Valley purchased Snowbasin. Earl and Gladys felt it was time to retire and enjoy more time on the mountain. Earl stayed on as a consultant for several seasons. 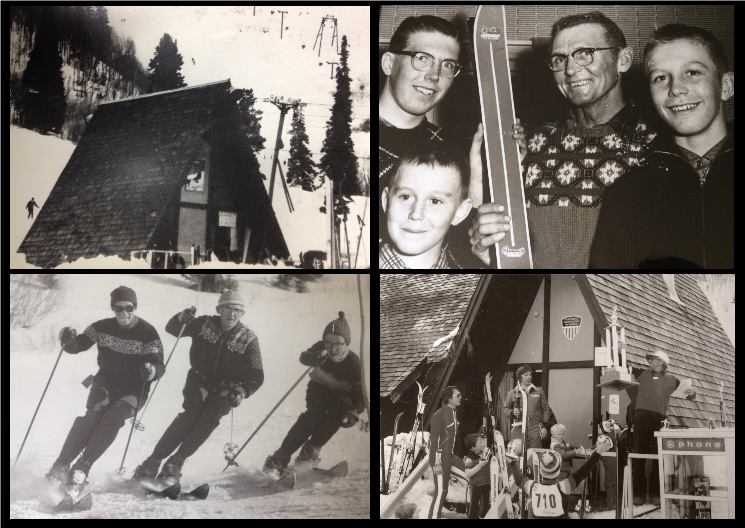 Up until 1957 the Forest Service Shelter was used to treat the injured. Finally in the summer of 1957 they received a small 12' x 20' cabin from the Bureau of Reclamation that was previously used at Pineview Reservoir. The new building was expanded to 12' x 30' shortly after installation. In 1966 the Ski Patrol building was again expanded to its current size. The building was used by the Ski Patrol until the early 2000's when the new operations center and maintenance complex was completed. Today, Intermountain Health Care runs a small clinic in the building.Top left: Ski Patrol building installation. Source: Ralph Johnston Collection 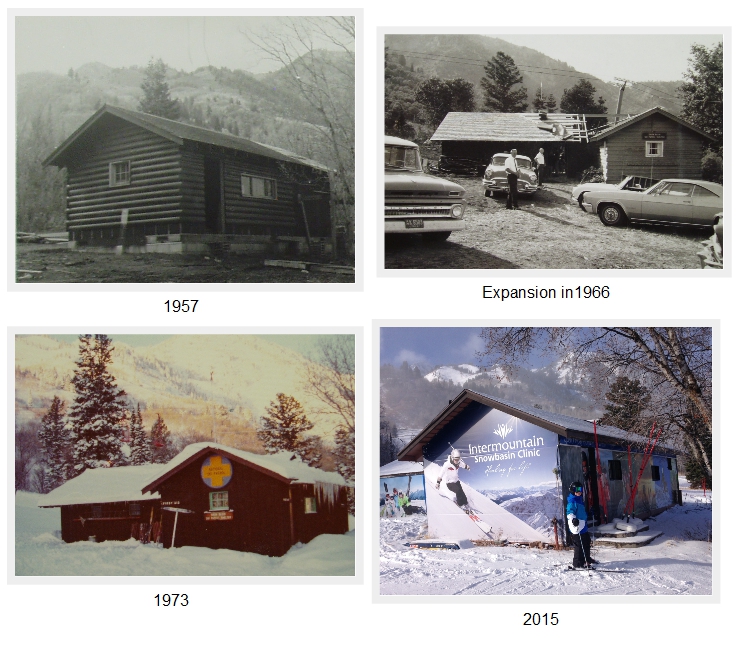 In an article by the Ogden Standard-Examiner, Snow Basin states: “the reason for the lift is because skiing in Snow Basin has increased where it is necessary. One of the big reasons of the increased interest is the Standard-Examiner ski school staged annually. Many of the students of this event are now advanced skiers: The new lift will have a capacity of 76 chairs for a single trip.” The lift covered an area that catered to beginner and intermediate skiers but also had several challenging runs that would satisfy the expert skiers.” 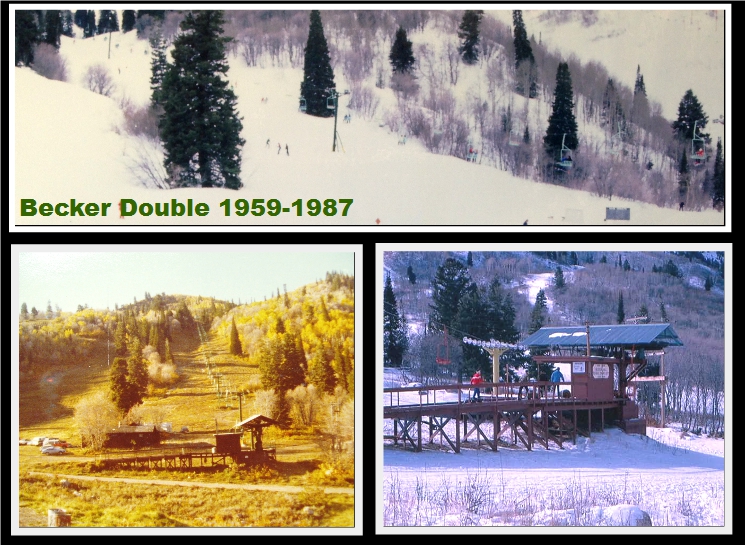 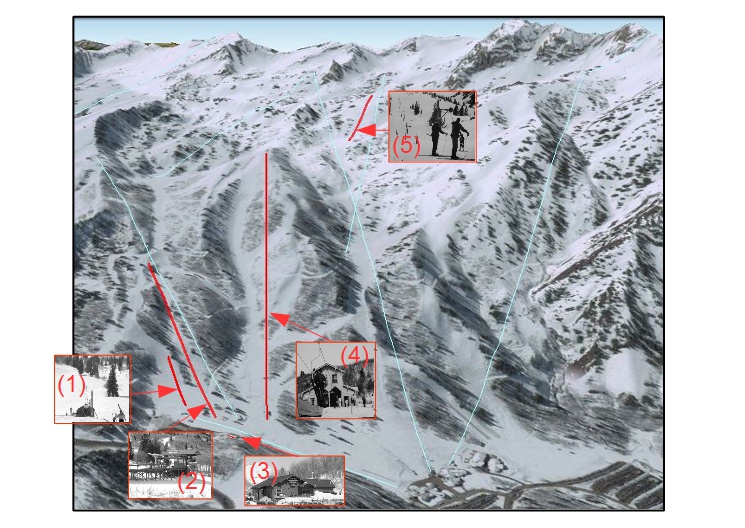 Snowbasin lifts and Lodge at the end of the 1950's. This is a 2006 Google Earth arial map that I have marked the approximate location of the lifts that existed at that time. The light blue lines denote current lifts and the red lines denote lifts as of 1959. (1) Becker Rope Tow (2) Becker Double Chair Lift (3) Forest Service Shelter (4) Wildcat Single Chair Lift (5) Porcupine Tow