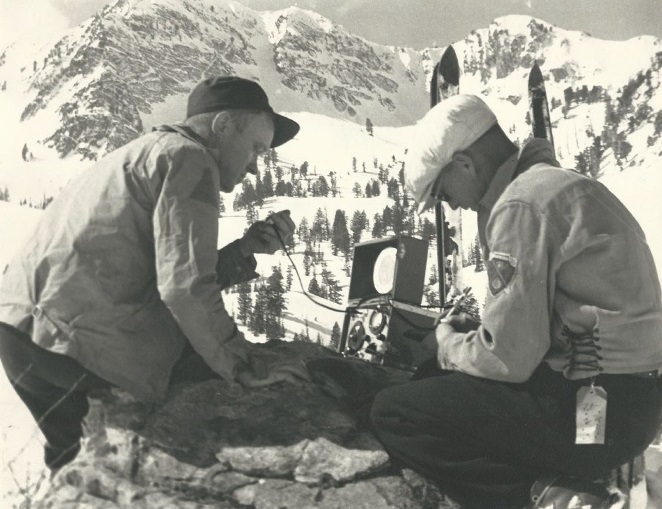 The first big race held at Snow Basin was the intermountain downhill and slalom tournament which was a two day event held on February 15-16, 1941. Area Ski Clubs from as far as Sun Valley competed and over 2000 spectators attended. The downhill race started just below Needles and ended at the bottom of Wildcat run. The Slalom was held on City Hill. There are still racing competitions held on City Hill throughout the season. Alf Engen won both the downhill and slalom events. Racing was a big part of Snow Basin in the early days and there were regularly scheduled races held throughout the seasons during the 1940's. 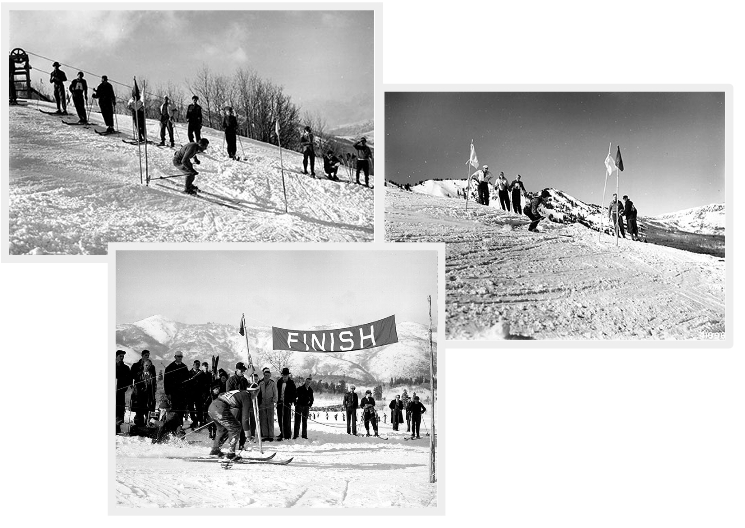 Halvor Bjorngaard was a popular ski jumper from the early 1930s. Halvor competed locally at Ogden's own Becker Hill. Halvor Bjorngaard, Alf, Corey, and Sverre Engen were close friends and competitors. In 1933, Halvor was killed in a motorcycle accident near Willard, Utah. To honor Halvor's memory, the Engen brother's and Snow Basin built a jumping hill that was located to the north of City Hill (There is a Electrical Sub Station at the bottom of what was Bjorngaard Hill). As part of the racing events on February 16, 1941, Bjorngaard Hill was officially dedicated with Alf and Corey Engen performing a double jump, while in mid-flight they both dropped a bouquet of roses. I haven't been able to obtain information on how long Bjorngaard Hill was used but my guess was until the 1950's when a new jumping hill was built near School Hill.

In an interview with the Derlin Newey, who claims to be the “last living skier still skiing Snow Basin since the day it opened”, Derlin stated that he remembers the ramp being built and said that Alf Engen gave him jumping lessons. Derlin still skis at Snowbasin Resort on a regular basis. 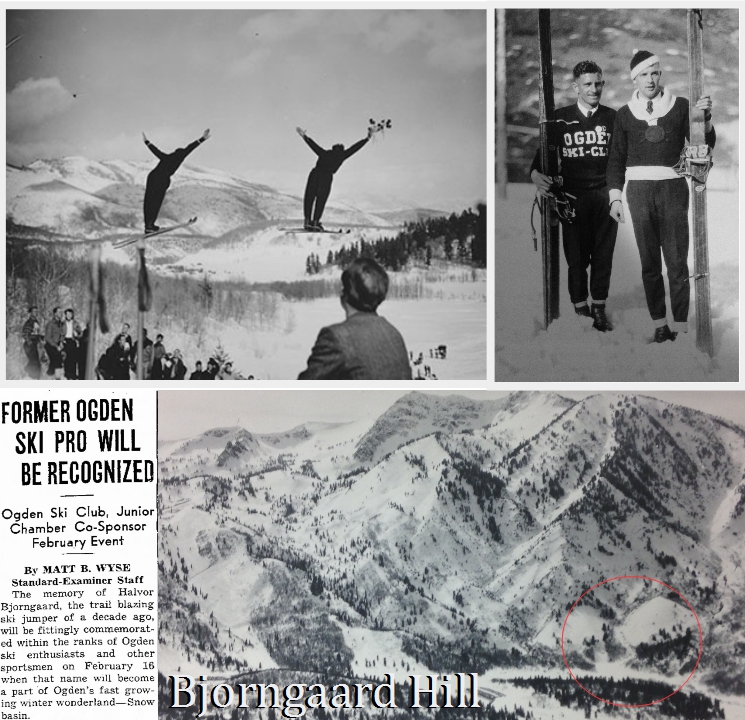 LOST RUN – Bjorngarrd Hill no longer exists and is what I consider a “Lost Run”. There are several Lost Runs at Snowbasin Resort and I'll point them out from time to time during this blog series. 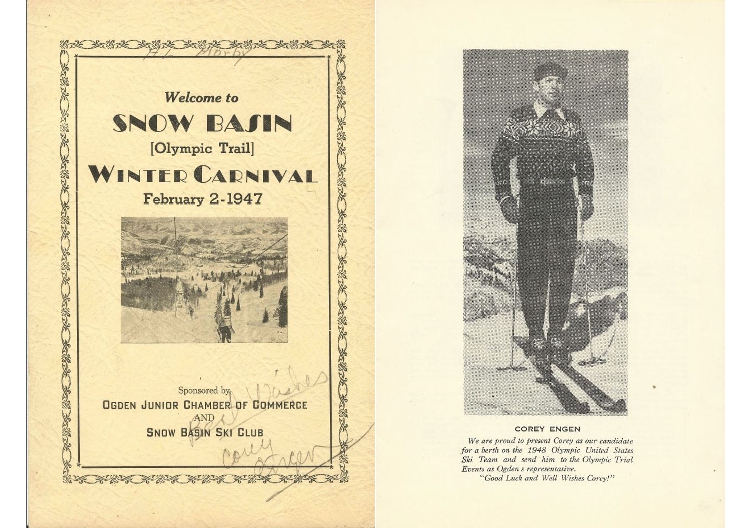 Becker Hill – In honor of Gus Becker who was a big supporter of Snow Basin and helped bring skiing to the Ogden area.

More Ski Run Name Origin will be posted throughout the blog series. 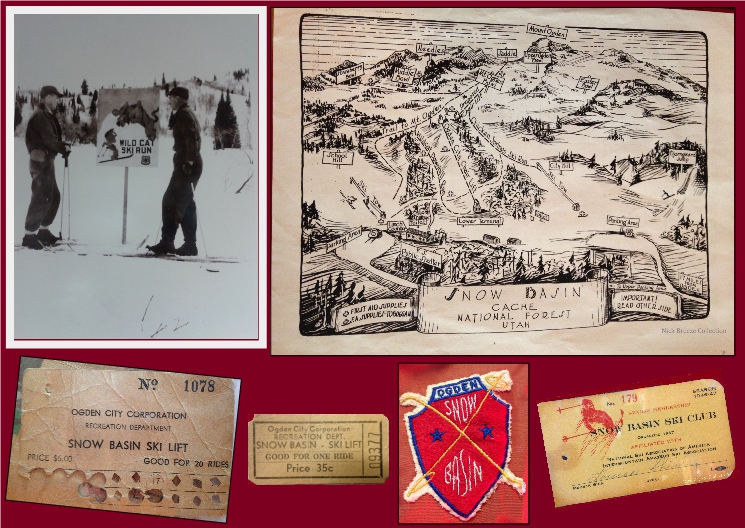 During the summer and fall of 1941 the base building for the Wildcat Single Chair Lift was constructed. The goal was to finish the lift in time for the 1941-42 Ski Season. There was also approval to build a permanent lodge and a road extension to the new base area and another parking lot. The Wild Cat Single Chair Lift was designed by E. Constam from Switzerland. E. Constam was one of the pioneers of early ski lift design and made a personal trip to Snow Basin in the summer of 1940 to discuss it. The lift was to be built by the Mine & Smelter Supply of Denver. The lift was to have 120 chairs, 9600 feet of 3/4” cable, 15 wooden towers and a 95 horsepower electric motor. The cost of the new lift was approximately $35,000.

Due to Ogden City budget cuts and the onset of WWII, the lift construction was delayed. Most of the materials to build the lift were already on site and had to be stored for several years. They were so close, all they needed was a construction crew to assemble the lift. Between 1941 and 1945 Ogden City and the Ogden Ski Club worked diligently, season after season, to get the lift constructed. The biggest issue was the budget cuts due to WWII. Finally in the summer of 1944 the funding was available -- but by the time a construction bid was approved, it was too late in the year to begin the job, so they would have to wait another season.

Construction Resumed in the Summer of 1945 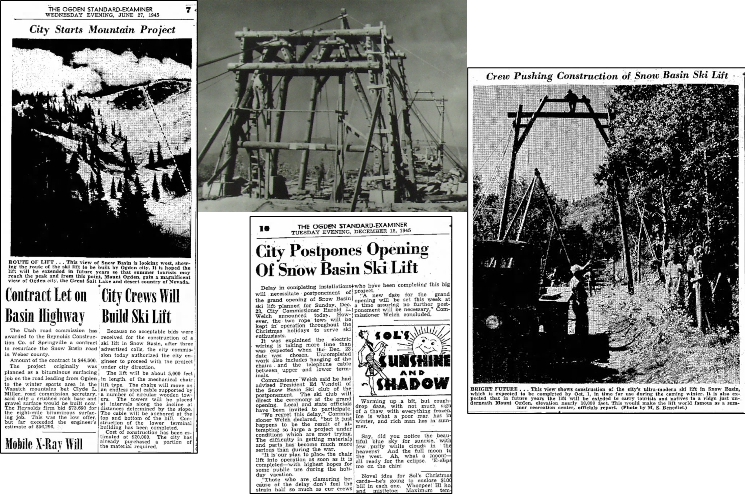 Snow Basin was open on a limited basis during WWII. The property was used at times for military training maneuvers during the summer and in the winter the Ogden Ski Club and Snow Basin set up a recreation program for military personal to learn to ski. The Ski Club rounded up the necessary clothing and equipment for the soldiers and the Ski School taught them how to ski. There were several military bases in the area that used Snow Basin and hundreds participated. 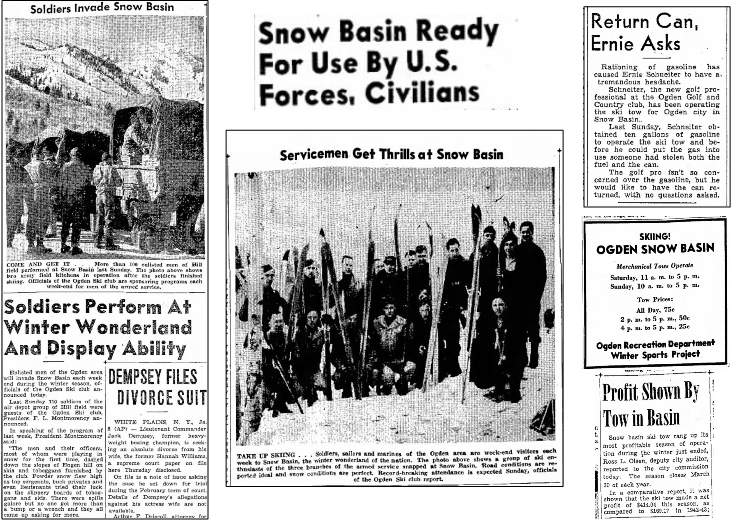 An article written by F.L. Montmorency, who was an important part of early Snow Basin development. He wrote in a local 1947 ski publication titled: SNOW BASIN, A Story of Cooperation. According to the article “Pearl Harbor put an end to all construction for the duration. That winter Sverre and Corey Engen installed an improved rope tow on school Hill and took over the ski school. They handled it in fine style and added racing instruction. In February the basin was the scene of a very successful Intermountain downhill and slalom tournament. The following year the county really felt the effects of being at war. Gas rationing made transportation difficult, but the State, which had now taken over the Snow Basin road, was persuaded to keep it clear to provide winter recreation for the military and civilian personnel of the four Army and Navy depots in the Ogden area. The Ski club collected equipment for use of enlisted men and handled a regular program for the military. The depots furnished buses for transportation, and hundreds of soldiers, sailors, Wacs and Waves had their first introduction to a pair of skis.  The same sort of program was followed for the rest of the war years.”