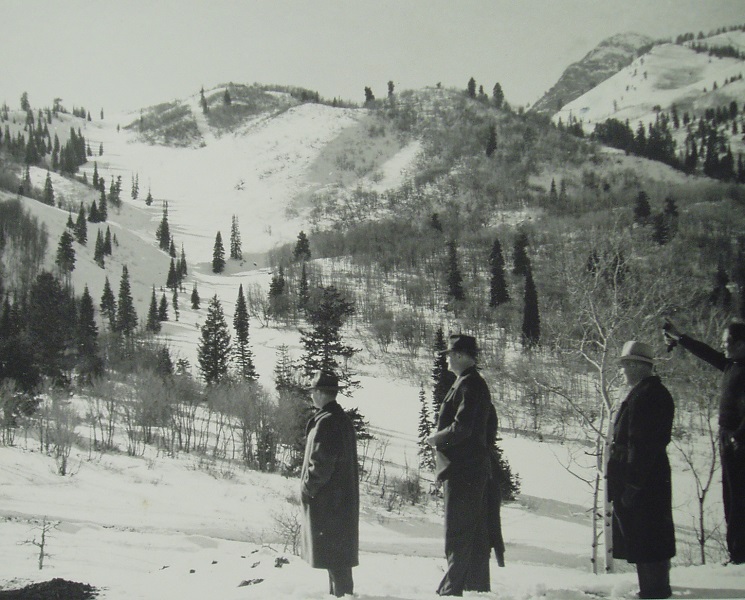 On November 27th, 1940 the Ogden City Mayor officially proclaimed Snow Basin open. There were two events to celebrate the opening of the new “Winter Wonderland”. One at Weber College and the other at Snow Basin. The event at Weber College was called “The Winter Sports Carnival”. The Ogden Chamber of Commerce and the Ogden Ski Club sponsored the event. Big names in the ski industry attended the event including: Dick Durrance and Alf Engen. The idea behind the Carnival was to kick off the winter season and get the locals excitied about their new ski area. 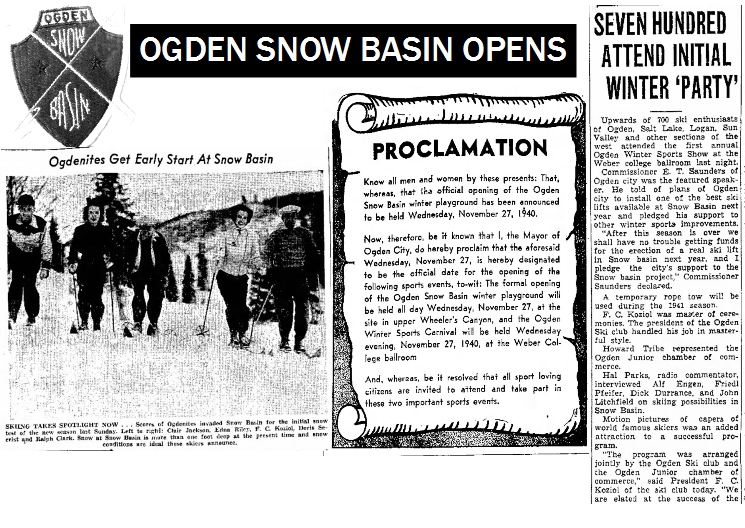 In the first season of operation Ogden City only had a budget for one rope tow. Ogden Ski Club members, Ora Smith and Jack Whittaker received permission from Ogden City and the Forest Service to install and operate a gas powered rope tow on School Hill. The tow in mention was previously used for skiing on a hill near Huntsville, Utah. School Hill is much more forgiving for teaching beginners due to the fact that it is on a lower grade than City Hill. 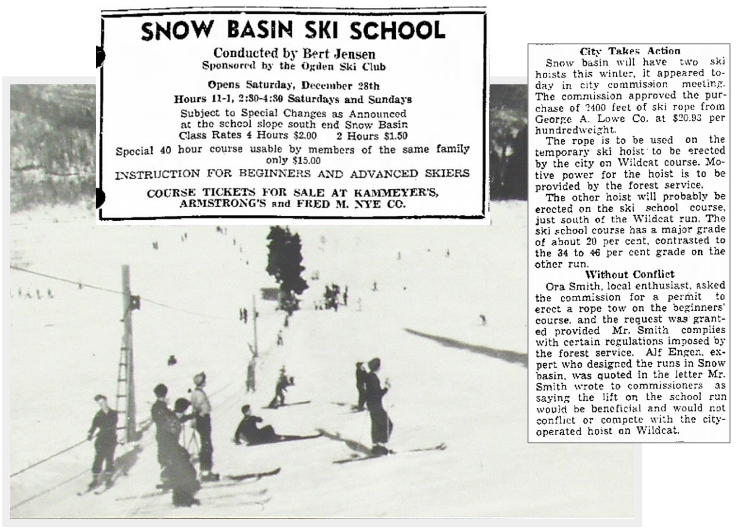 It was dedicated folks like Ora Smith, Jack Whittaker and the rest of the Ogden Ski Club that helped make Snow Basin a reality. The creation of Snow Basin was a labor of love for skiing itself. There were many obstacles that were overcome to get to this point and there would be many more -- just to name a few: The Great Depression, financing, local and national government bureaucracy, weather conditions, and WWII - but they were relentless. This ski area was becoming a reality! 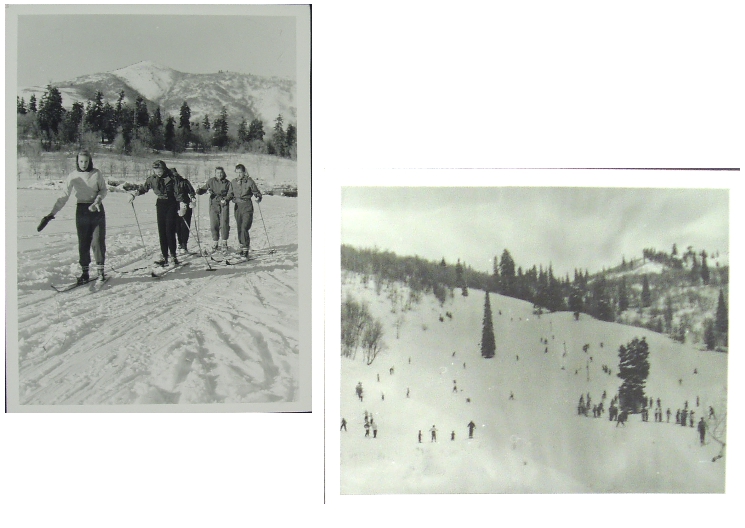 Left: A group of skiers near the lower parking lot.  Right: View from the bottom of School Hill. Photos: Ralph Johnston Collection.

Snow Basin's first lodging was two temporary shelters that were previously used by the CCC as barracks. They were situated near the base of the future Wildcat chair lift. Restroom facilities were located behind the shelters. The first season at Snow Basin was a bit primitive but the local skiers were just happy that the facilities were open and a bright future was ahead. 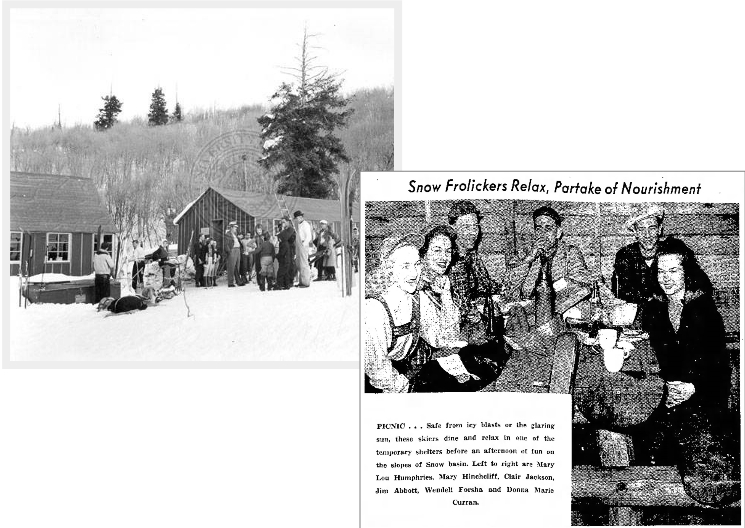 The rest of 1940 consisted of working out the bugs of the new ski area. The Ski Patrol needed equipment, the tows had to be maintained and keeping the road clear after snow storms turned out to be a bigger headache than expected. All of your typical new business start up issues had to be addressed. On the bright side: Plenty of fresh Utah powder and people were coming out in droves. It was a success! 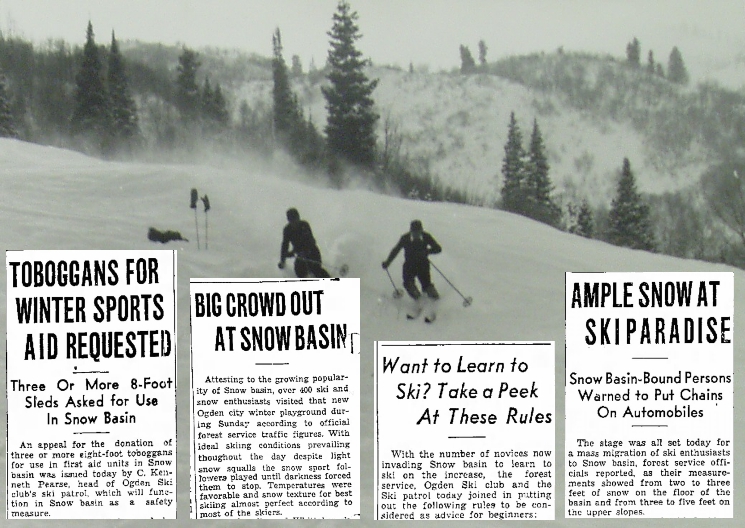 1940 was an incredibly busy year and with all of the obstacles, it's amazing that everything came into fruition. By the end of December we had a fully operating ski area.

Side Note: Ogden City was only responsible for the operation and maintenance of the ski lifts. The Road was maintained by Weber County; the Shelters were constructed and operated by the Forest Service; The National Ski Patrol handled safety, and the Ogden Ski Club sponsored the first Ski School.

It truly took a team effort to open and operate Snow Basin. 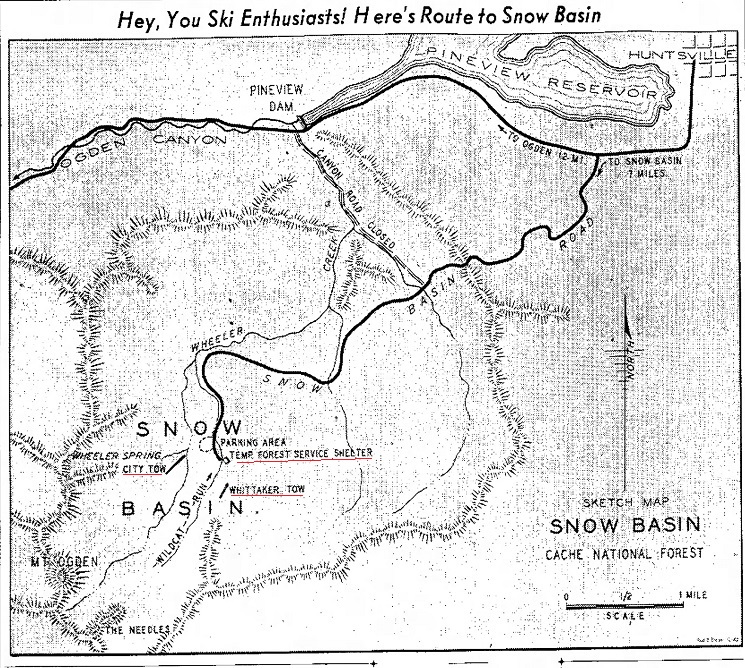 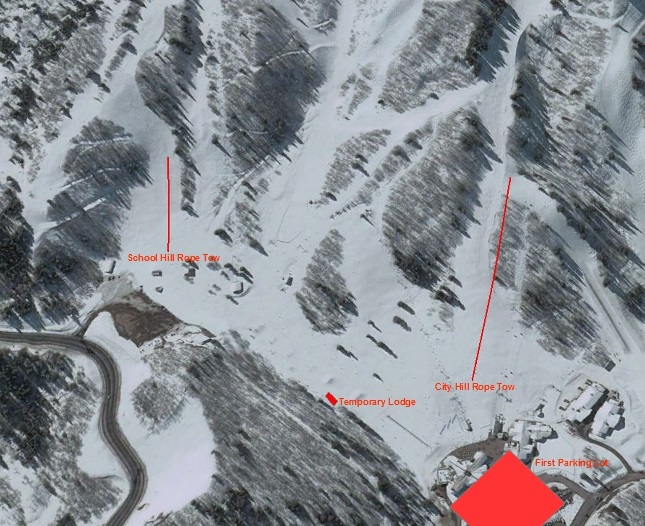 Approximate location of where the Tows and Shelter were located. Photo: Google Earth, April, 2005.

Snowbasin Resort will celebrate the 75th Anniversary of being declared open as a business on November 27, 2015 with a Proclamation Day with Mayor Caldwell!